Books by Virgil Alexander
The books are available in print and e-book and may be purchased through your local booksellers, which I encourage to support your community. If they don't have it stocked they can order it for you.
Click a book title to buy the book online.
​ 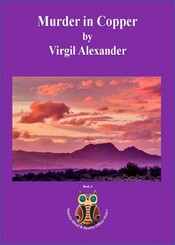 Murder in Copper
First Edition. Published January 2019, by Aakenbaaken & Kent. Theft. Espionage. Murder. Revenge.  Apache Policeman Victor joins Deputies Allred and Sanchez in Murder in Copper, a new murder mystery by author Virgil Alexander. ​The book is set at fictional new copper mines in Miami and the Gila Mountains of Eastern Arizona. The story includes the cultural and natural history of the real settings, as well as local mining and ranch history. It includes an undercover investigation of copper theft, industrial espionage, murder by a diplomat, and a criminal revenge plot against Allred’s family. Sheriff Bitters and Deputy Patricia Haley are also prominent in the story. Scenes take place in Flagstaff, Phoenix, Tucson, the East Valley, and Silver City, New Mexico in addition to the principle locals. The story includes familiar characters from the earlier books, and introduces a complete set of new people, some of whom will likely make appearances in future stories. Side plots involve government employees getting the job done in spite bureaucratic posturing, the impact of alcohol on the reservation and in rural towns, personal ethics and great temptation, and peeks at foreign relations in former Soviet Block countries. A fast paced, multifaceted mystery filled with interesting and relatable characters. 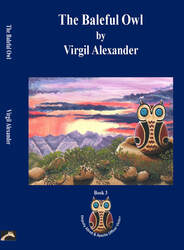 The Baleful Owl
​Second Edition Published July 2018, by Aakenbaaken & Kent.  The ancient Salado Puebloan people had hoped that the gift of turquoise eyes would cause the owl to carry their pleas for water and for protection from the new enemy people who were invading their mountain home, but it was not to be. They were driven from their home of 1000 years and disappeared into the river people.   Seven hundred years later the baleful owl would, by the hands of a greedy artifact thief, cause the murder of an archaeology student, and the attempted murder of his associate, a member of the San Carlos Apache Tribe. The Pinal County Sheriff requests the assistance of Sergeant Al Victor of the Apache Tribal Police in the investigation. Bren Allred of the Graham County Sheriff's office is drawn into the investigation as a member of the State Wide Antiquities Task Force, bringing deputy Manny Sanchez with him.  Before the case is resolved a second murder in New Mexico, the involvement of a most respected international antiquities dealer, and the attempted murder of Manny Sanchez will have to be dealt with, in addition to the normal demands of their own patrol areas. From the crime scene in upper Queen Creek Canyon in the northwestern Pinal Mountains, and their jurisdictions in the Gila Valley, the investigation takes them to Chaco Canyon in New Mexico, and the Arizona State Museum in Tucson. 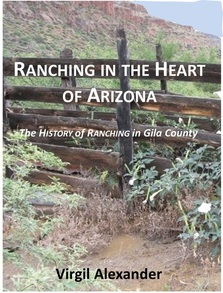 Status: Due to the unexpected high number of ranches and the amount of information accumulated to date, this story will have to be written in two or more volumes. There are several ranches that I now have the complete history, so think I have enough of these to compile the first volume.  I am attempting, as I can around my commitments for my published mysteries and future mysteries, to get the first volume compiled by the end of the some year and send submittal queries to publishers.

The area that now comprises Gila County was one of the last parts of Arizona to be settled, primarily due to the fact that it was the stronghold of the Western bands of Apache. The previous claimants, the Spaniards and Mexicans, called the region Apaceria, and because of the Apache they stayed clear of the area. With the Mexican Cession as part of the 1848 Treaty of Guadalupe Hidalgo, Apacheria became United States Territory. Beyond military expeditions and a few heavily armed civilian mineral expeditions the Americans also avoided this new possession until the early 1870's when the first daring miners and perhaps more daring ranchers began to settle the rugged mountains and basins, while still fighting the Apache.

The story of these ranchers is a microcosm of the American westward settlement, with all the daring, hardship, tragedy, human drama, and triumph most think only happened in western fiction. Many of the stories have never been reported in print until recorded for this history.  It's exciting to see this volume nearing fruition.  I will update this  as progress is made.